Class 50 and Class 25 on engineering works at Charlton station

This weekend I ran a few trains on Charlton.  It is probably the last time I am going to set up the layout before selling it.  I fixed up a rake of engineering spoil wagons and also some hopper wagons.  The engineers spoil wagons are all kit built and it gave me a lot of satisfaction seeing the rake running together.  They have been completed over the years, with varying levels of competency; however, it feels very great to see a train composed of my own kit built stock.  It is now time to sell Charlton and make room for the next layout.  I have a baseboard ready to start (subject to some work with a saw to open out one end) - and I am excited to build a much more ambitious layout.  Anyhow enjoy for now - more updates soon! 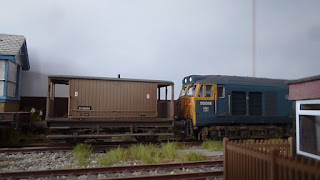 Engineering Sunday at Charlton.
Initially a Class 25 brings in hopper wagons with fresh ballast.
Before leaving and collecting a rake of spoil wagons for spent ballast.
The spoil train is too long for the loop at Charlton, so a class 50 picks up the train to head down the line for track relaying.
Posted by Choppers at 11:53

Choppers
This is a blog about my experiences of building one (or several!) model railways. I am relatively new to railway modelling, although I have long been interested from the armchair. I am learning my way around the hobby as I go. My modelling is far from perfect, although I hope it is improving. My aim is to share my experiences and enjoy my hobby along the way.